Poets’ POV Powers ‘NYC From the Inside’ 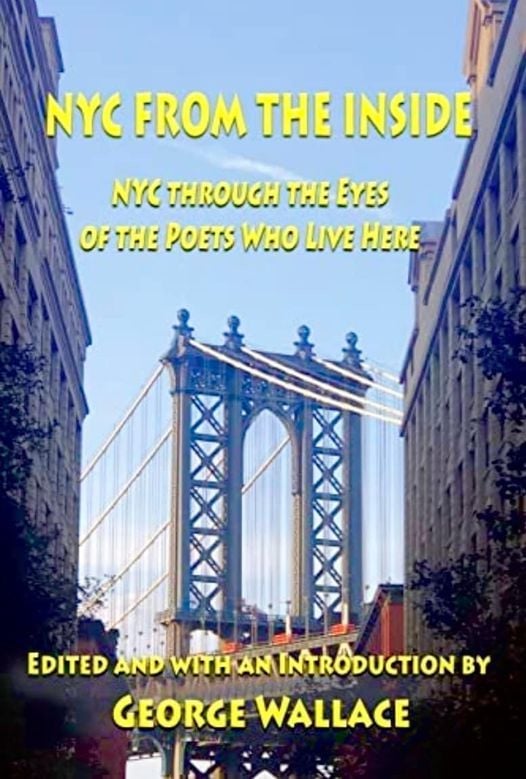 BY PUMA PERL | Who better than George Wallace to bring together a melting pot of writers who have inhaled New York City air and exhaled rhymes and rants and rebellion and resignation and revelry and dreams?

When I first became acquainted with George, we used to joke that he had discovered the secret of cloning, because he managed to be hosting venues and/or reading simultaneously from the East to the West Village, from London to Croatia. The author of 39 solo poetry collections, he has showcased, mentored, and published hundreds, probably thousands, of poets (179 of them stroll through the streets of this volume). Lifelong or former residents, transplants from the states or abroad, long-term or occasional visitors, names ranging from the widely recognized to the largely unheard of—each one has a vision and the ability to translate it onto the page.

This is the type of anthology that, to me, is most fun to open at random, like jumping off at a subway stop to explore an unfamiliar area. (Full disclosure: My explorations take place mainly at my desk, making this volume particularly useful!) In these times, we need inspiration more than ever and these poems are reminders that one never knows what lies around a corner. Especially meaningful to me is remembering our recently departed while discovering new voices.

As the late Miguel Algarín, godfather of the Nuyorican Poetry movement, writes in Sublime:

the world is beautiful

seek it trust it

Several pages down, we find the dearly missed Steve Cannon, founder of A Gathering of the Tribes  (who rarely published his own work) represented by the poem Orange:

This is the story

I’m trying not to remember

This is the dream

I don’t want to recall

This is the song

of a ball in space…

And, of course, no New York City compilation would be complete without the presence of another artist we’ve lost, Steve Dalachinsky—poet, collagist, music critic, bon vivant. Could there be a title that sounds and smells more like the city than Subway Systems?

N.Y. is my nightmare   my dream

It is what is beneath the tracks

homeless shaman as greasy as the tracks…

As befitting the sensibility, readings and release parties are taking place all over the city and across the country. Zoom performances include contributors who are too far away or otherwise unable to appear at the venues. Upcoming NYC live readings include KGB Bar, May 11, 7-9pm and the Parkside Lounge, May 15, 4-6pm. For additional information, visit Facebook group, Poetrybay Productions, at https://www.facebook.com/groups/719301545718834. NYC From the Inside is available at the usual online sources as well as in many independent bookstores throughout the country, real and virtual.