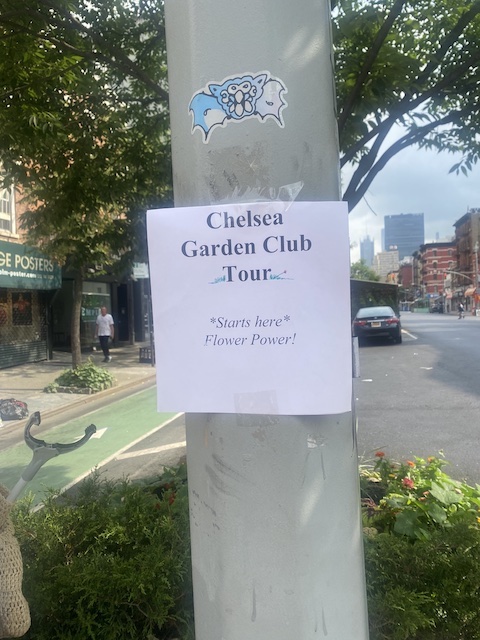 The morning of Saturday, July 16 saw the weather ping-ponging between ominous clouds and radiant sunshine. This type of summertime sky ambivalence is exactly what members of the volunteer group, Chelsea Garden Club, crave. Fortunately, for the club’s dual-avenue walking tour, the sun remained a force high in the sky. The tour began just after 10am on Eighth Avenue and West 17th Street, and trailed up to West 29th and Eighth before shifting over to Ninth Avenue and working its way back down. 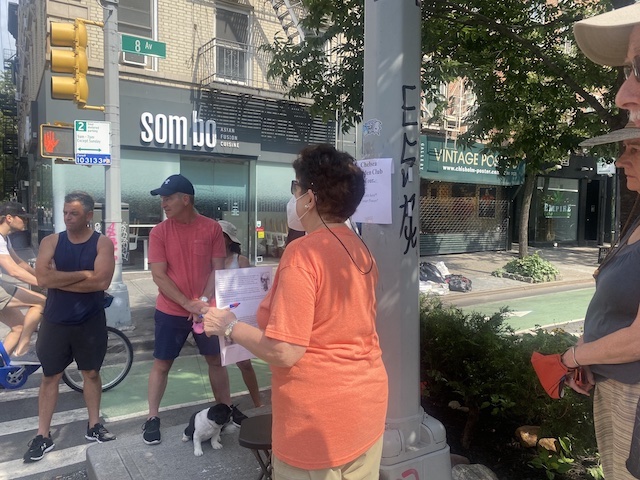 Phyllis, one of the club’s unofficial co-leaders, said wryly, “There are always stragglers,” as more and more members trickled over to the starting corner. In the meantime, Phyllis handed out fire hydrant access permits to anyone in need. These coveted permits allow gardeners to access the fire hydrants near their garden plots, letting them forget the struggle of hauling barrels or buckets of water from where they live to where they garden. 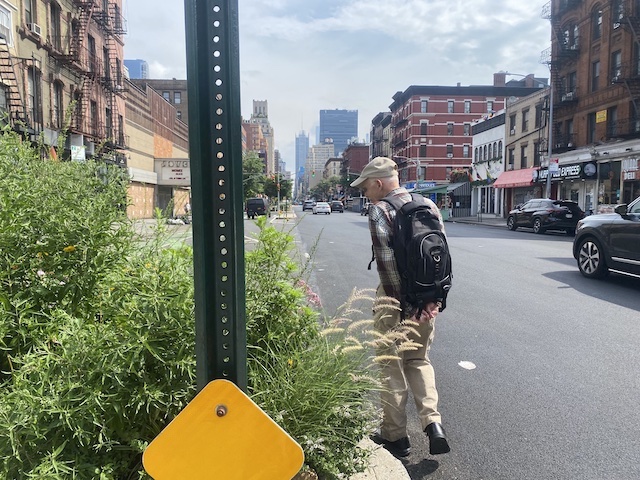 The walking tour picked up in its freeform style, with people peeling off and returning at their leisure. Some, like Milt above, picked up their pace to allow for extra time and space to admire what they wished to. Each garden plot (located on traffic islands in the busy avenues) is like a tiny jungle—a gem of green, brightening the views of passersby. 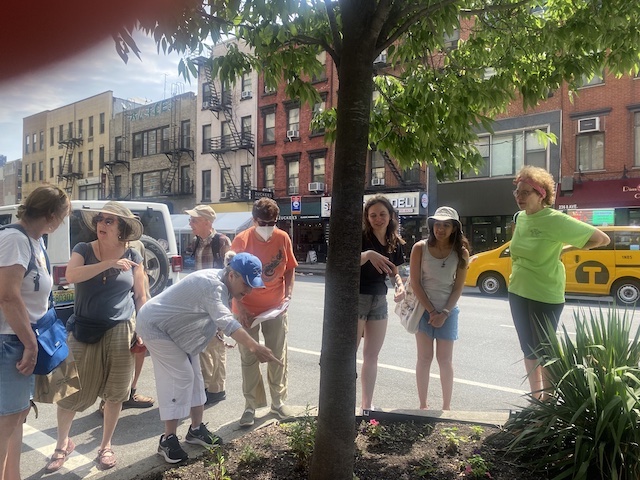 At each stop the club encircled the plot, sometimes listening to the presentation of the area’s gardener, sometimes just enjoying the lush greenery, and often giving tidbits of information on how to grow more difficult flowers, divert loiterers and litterers, or create barriers with certain types of grass. Though the gardeners of every plot weren’t all there, the sense of community within the Chelsea Garden Club was palpable—each member knew whose area was whose, and their peers’ respective preferences. 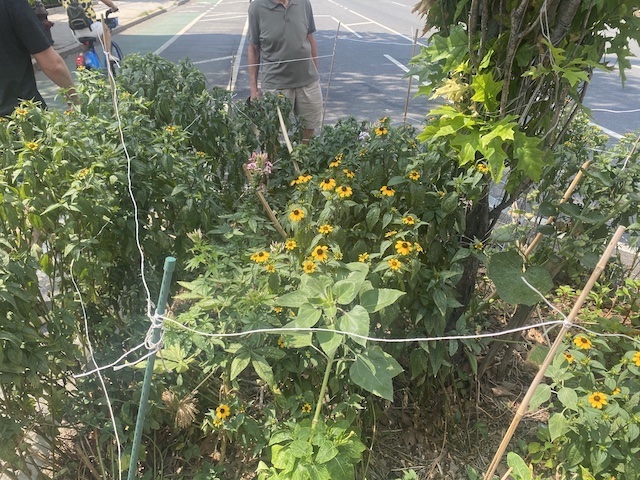 A prevalent issue for the local cultivators is the verboten status of solid fences around their plots. The NYC Department of Parks & Recreation doesn’t allow the volunteer group to build real fences around their gardens, which often leaves the small plots of land at the mercy of peeing dogs, careless vandalizers, and napping locals. Some gardeners have taken the initiative to furtively build fragile fences of their own, like the one pictured above. Regardless of each gardener’s choice, the realities of gardening in the center of urban chaos are more than present. 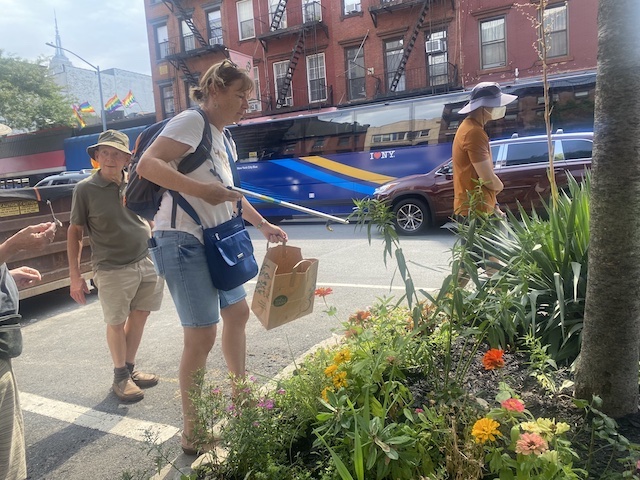 Due to the open nature of each garden plot, they are left highly vulnerable to careless litter. The Chelsea Garden Club takes great care to pick up trash not only in the gardens, but in the surrounding area as well—a great initiative that protects the ecological health of the neighborhood. Especially on Eighth Avenue, the club has found that trash overflow from restaurants, bars, and even thoughtless pedestrians ends up in the local green spaces. 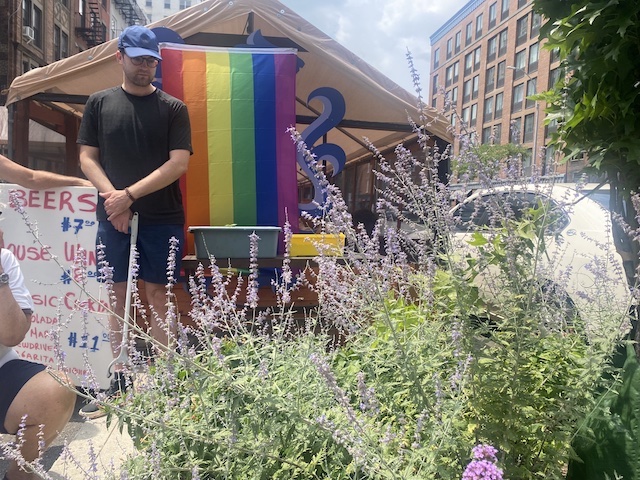 Trash cleanup isn’t the only way the Chelsea Garden Club cultivates and protects the environment. Pictured above is a bush of Russian lavender which attracts a huge number of bees and other pollinators. The luscious growth of plants like this one helps the bee population — and in turn the earth in general — immensely. Gesturing to the lavender, Missy Adams, the coordinator of much of the club’s logistics said, “This is what it’s about. See all these bees?” 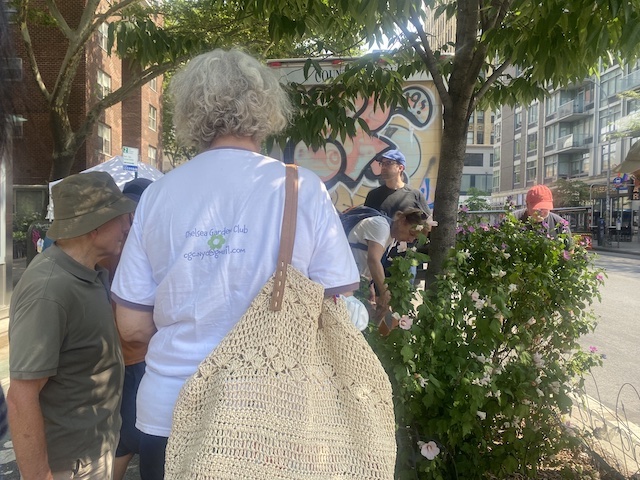 Missy Adams represented the club proudly, having donned her Chelsea Garden Club T-shirt for the occasion of the day. Adams encourages locals to participate in public gardening, and wants each gardener to leave each other to their own knowledge and preferences, rather than to overwrite with their own tips and tricks. One of Adams’ own gardens was recently vandalized badly, but she is recovering with new growth, as well as a soon-to-bloom rose garden in a nearby plot. 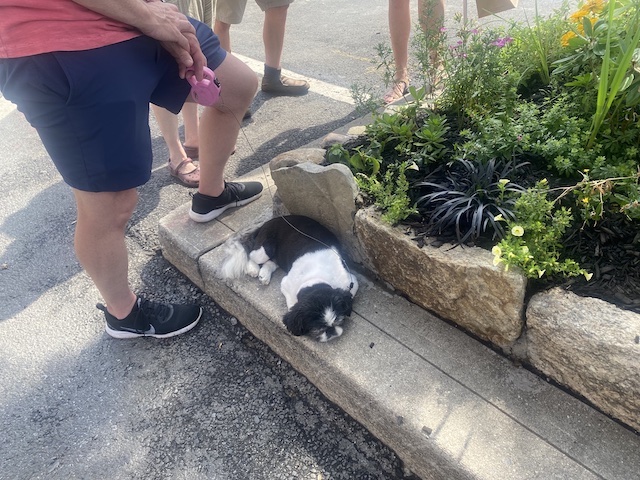 Some furry friends along for the ride found shade in the leafy, spritely trees lining Eighth Avenue. During the hot summer months in the city, these gardens provide a breath of cool, fresh air for all, including all of Chelsea’s beloved puppies. 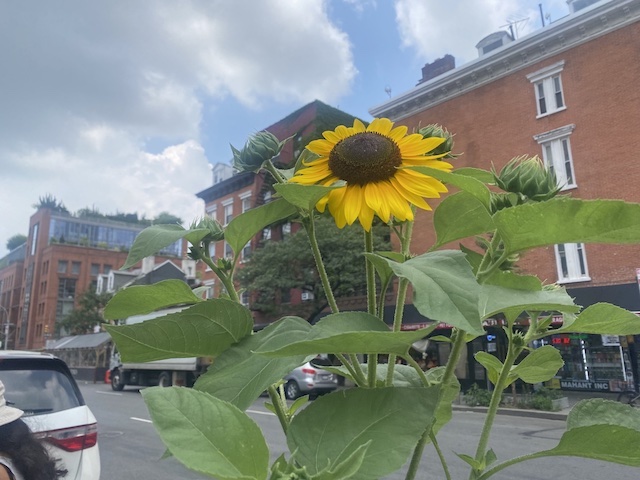 As July charges on, sunflowers along Ninth Avenue reach towards the hot sun, many growing to heights over six feet. Though flowers like these are beautiful additions to the area’s ambiance, oftentimes the Chelsea Garden Club receives pushback from the Parks department regarding what they allow to grow in their garden plots. Negotiations with the City have mostly revolved around the trees in each intersection plot, and how best to protect them, not what might be beneficial to grow around each tree. Club members have found that Parks officials neglect the health of trees and plants in each small garden, and are of little help when it comes to hauling away dead branches or pruning overgrown trees. 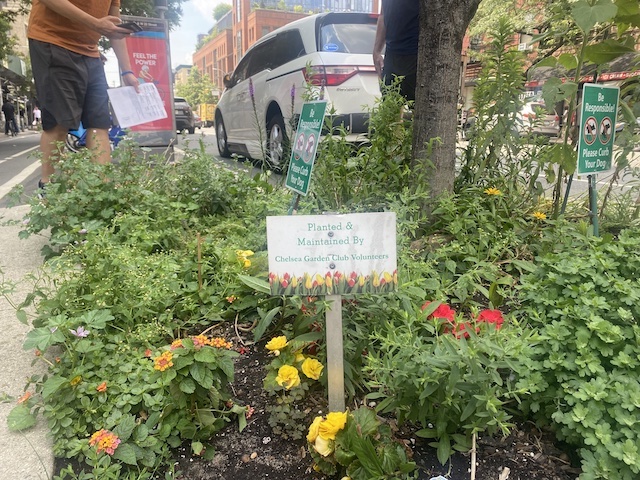 The Chelsea Garden Club is a wonderful facet of the neighborhood, and provides close community for many residents. In a city where skyscrapers seem to shoot up faster than sunflowers, this club lets locals explore their natural passions and increase the vibrance of their already green thumbs. Flower Power!