Note: This Opinion piece replaces the original, pulled from this site by the editor, at his discretion, just after 9:20pm on Sun., Dec. 18, 2022, shortly after its publication. Those in possession of the original should disregard its content and consider what’s below to be the only version endorsed by the author.

GUEST OPINION BY SHELLI ROSEN | As both a Chelsea and Penn South resident, I want to express concern to Manhattan Community Board 4 (CB4) about the process—or lack thereof—employed by the Waterfront, Parks & Environment Committee (WPE) at their December 8 meeting, that resulted in their passing a motion to generate a letter to the NYC Department of Parks & Recreation, recommending the immediate closure of our Penn South Park Dog Run. (That letter will be voted on by the full board at their Jan. 4, 2023 meeting.)

I believe the WPE has conducted the public discussion and decision-making process with a bias against the Dog Run. Statements supporting their decision have been disrespectful, in tone and content, to the hundreds of local residents who have said the Penn South Dog Run is a valuable and important resource for them. At the WPE’s December 8 meeting, committee member Lowell Kern jokingly suggested two absurd alternative locations for the Dog Run, and was cut off by co-chair Leslie Boghosian Murphy (only for him to try again later). WPE Public Member Catie Savage said, “It’s silly that this has become such a huge discussion. It’s a Dog Park.” She went on to call the closure an “important sacrifice” to get “people on board with a more permanent Dog Park, and helping us not have five-hour meetings.”

Instead of recommending any sort of interim compromise—such as later opening or early closing hours, as a few WPE members suggested, the committee voted to recommend that the Dog Run be  shut down immediately. That decision has especially harsh consequences for the elderly and disabled of Penn South, some of whom have told WPE and the full board that they are unable to walk to Waterside Park, which is 1.25 miles round trip from Penn South.

Despite the fact that over 300 letters supporting the run were shared with CB4 by the District 3 Office of New York City Council Member Erik Bottcher, some committee members took the position that the number of supporters was insignificant in comparison to claims made by a relatively small number of opponents, whose (as this writer sees it) often hyperbolic and false statements the committee was willing to accept without verification. In the November 10 WPE meeting, co-chair Maarten de Kadt stated that he had counted nine letters by opponents, to give just a rough idea of the disparity in numbers.

The Community Board is supposed to represent the community and be responsive to their input. But in this case, a large group of community members have been passed over in favor of a much smaller group.

Given the groundswell of support for the Dog Run, it would have been more appropriate for the committee to have adopted a neutral stance, while recommending a short-term compromise and an alternative location put in place before recommending the closure of our Penn South Park Dog Run. If Parks accepts the letter that seems headed for ratification by the full board on January 4, hundreds of residents in and around Penn South—and their dogs—will be left out in the cold. 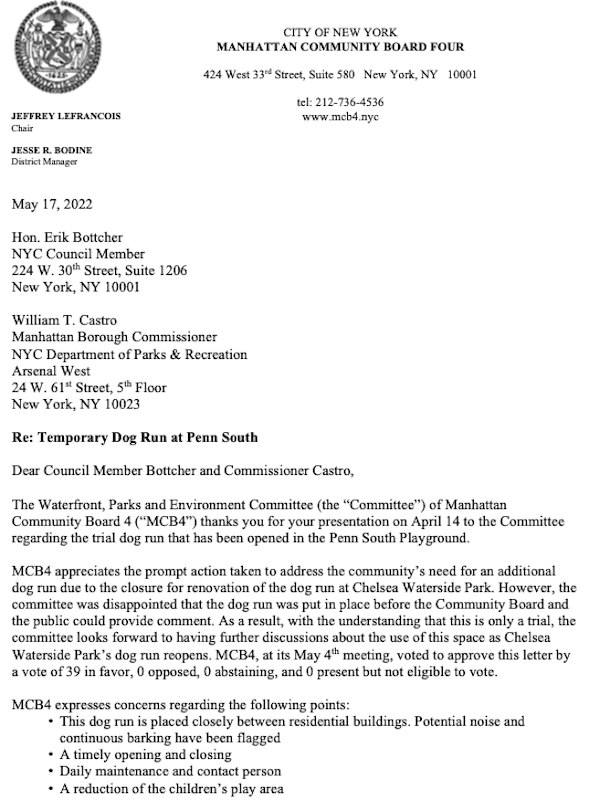 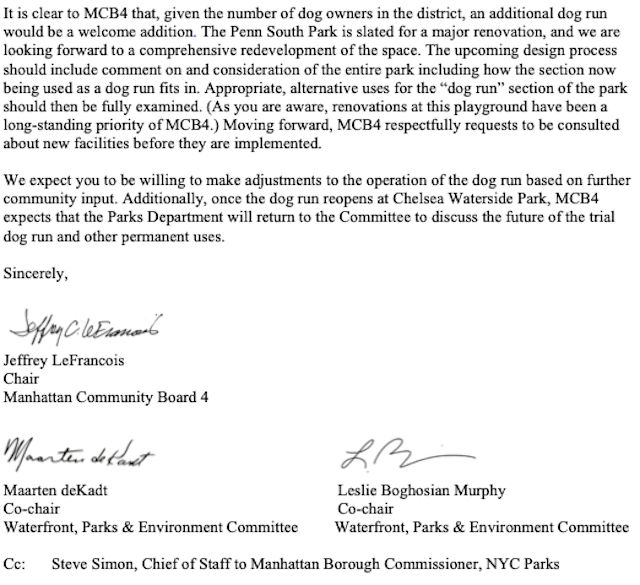 NOTE: The views expressed by our Guest Opinion writers are not necessarily those of Chelsea Community News–an independent, hyperlocal news, arts, events, info, and opinion website made possible with the help of our awesome advertisers and the support of our readers. Our Promise: Never a paywall, no pop-up ads, all content is FREE. With that in mind, if circumstances allow, please consider taking part in our GoFundMe campaign (click here). To make a direct donation, give feedback, send a Letter to the Editor, or contact our founder/editor, send an email to Scott Stiffler, via scott@chelseacommunitynews.com.

To join our subscriber list, click here. It’s a free service provding regular (weekly, at least) Enewsletters containing links to recently published content. Subscribers also will be sent email with “Sponsored Content” in the subject line. That means it’s an exclusive message from one of our advertisers, whose support, like yours, allows us to offer all content free of charge.